Saturday’s event commemorated the forced march of some 70,000 U.S. and Filipino prisoners of war captured by the Japanese in the Philippines during World War II. According to historians, the starving and ill-treated prisoners were forced to march 63 miles to a prison camp near the town of San Fernando on the island of Luzon. Only 54,000 prisoners lived to reach the camp; up to 10,000 died on the way and others escaped in the jungle.

The organizer of the event said the march was a way to commemorate the actual Bataan Death March and to honor those who died as well as those who survived the grueling experience.

“It was my idea to conduct the event,” said 1st Sgt. Tracy Amadi, first sergeant for Dental Health Activity Bavaria. “I think it is very important to honor the sacrifices that veterans before us had to endure and this event gave us that opportunity. It also allowed my Soldiers to come together to foster esprit-de-corps and to test themselves physically and mentally.”

While the original death march in 1942 covered more than 60 miles in jungle terrain, Saturday’s memorial march took participants through the scenic countryside of Bavaria. Most participants completed Saturday’s foot march in about 8 hours.

“This is the ultimate challenge when it comes to foot marches,” said Amadi. “I think each Soldier learned that they are capable of accomplishing any task that is put before them, no matter how daunting it may seem. It also helped them fully embody the Soldier’s Creed, that they are physically and mentally tough.”

For several Soldiers, this was their first time completing a long foot march since joining the Army.

“This was my first time completing a 26.2 mile foot march,” said Spc. Jianwen Chen, a dental specialist assigned to the Hohenfels Dental Clinic. “The biggest challenge for me was pushing through the pain. My best advice for anyone thinking about doing a 26.2 mile foot march is to eat a good meal and hydrate with water the night before. It’s also a good idea to bring along some energy boosting snacks for the march.”

While making their way along the 26.2 mile route, Soldiers took time to reflect on what it must have been like for the servicemembers making the 60-plus mile journey in 1942 under such harsh and hostile conditions.

“I did this march in honor of the Soldiers in World War II who had to endure excruciating pain and for their fallen comrades-in-arms,” said Spc. Dennicia Patrick, a laboratory technician assigned to the Ansbach Dental Clinic. “This was my first long foot march after serving in the Army for almost four years and it was very difficult. I would highly recommend to other Soldiers who are thinking about doing this march to train, stay motivated and don’t give up.”

“All Soldiers participating in the Bataan Memorial Death March were highly motivated,” said Quintana. “Our Soldiers all recognize the great sacrifices made by the World War II prisoners of war. It is important for Soldiers to participate in events like this to better understand the hardships and sacrifices made by their fellow veterans. At the same time, it helps to build camaraderie and pride with the organization.”

Amadi says Dental Health Activity Bavaria plans to conduct additional Bataan Memorial Death Marches in the future. “I hope this event will encourage my Soldiers to participate again next year even after my departure.”

Sun May 1 , 2022
“This is the nuclear physics equivalent of the launch of the Webb Space Telescope,” Sherrill said, referring to the 2021 launch of the most powerful telescope ever placed in space. “That’s a new tool that astronomy never had to look at the atmospheres of planets and stars and distant galaxies. […] 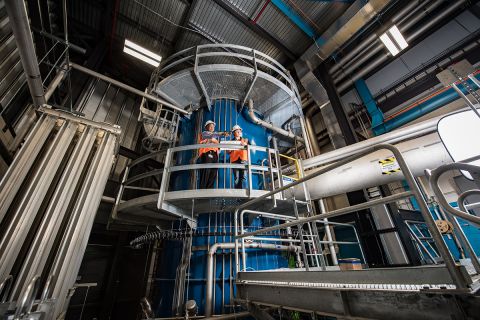