A yoga teacher has taught herself how to orgasm ‘almost instantly’ and without any stimulation— and scientists insist she’s not faking it.

Karolin Tsarski, from Estonia, spent a decade learning how to achieve ‘deep sexual satisfaction’ because she found normal intercourse painful. She claims she can now orgasm for up to 10 minutes without any stimulation.

The 33-year-old, whose ability was detailed in a scientific journal, believes that every woman possesses the power to ‘awaken’ their ‘orgasmic energy’.

Medical tests seemingly proved Ms Tsarski, who charges customers £60 for an hour-and-a-half consultation on how to spice up their sex lives, wasn’t lying.

And video footage of the bizarre experiment shows a breathless Ms Tsarski writhing on a hospital examination table.

She claims to have mastered the ability to climax without any stimulation by ‘years of yoga and tantric training’. 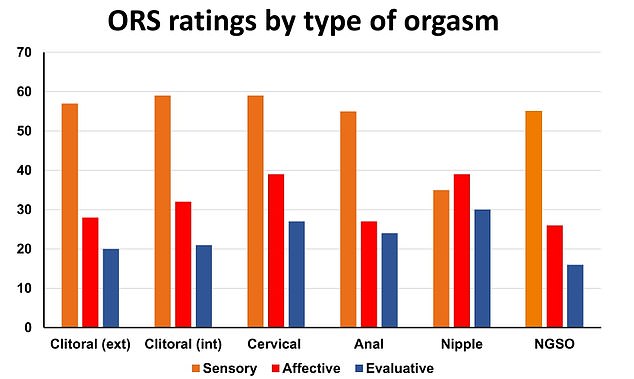 This chart shows how Karolin Tsarski rated her orgasms by differing erogenous zones. NGSO refers to non-genitally stimulated orgasms. Each orgasm is rated by three sub-scales. Sensory (the orange bar) refers to how the orgasm feels according to 13 different adjectives, for example ‘throbbing’, out of a possible score of 65. Affective (the red bar) is a scoring how the orgasm feels in terms of emotional intimacy and ecstasy out of a possible score of 45. Evaluative (the blue bar) rates the pleasurable satisfaction and relaxation of the orgasm out of 30. It shows she ranks her NGSO as similar to a clitoral orgasm from a sensory perspective but lower in terms of its emotional intimacy and ecstasy than her other climaxes

WHAT DOES SCIENCE SAY ABOUT THE FEMAL ORGASM?

An orgasm is a feeling of intense sexual pleasure that happens during sexual activity.

According to the NHS, it can also be called ‘coming’ or ‘climaxing’.

Both men and women have orgasms.

For females, there is no biological advantage to an orgasm as it is not believed to play a role in conception.

It is thought a purely pleasurable experience with no other advantage.

Female orgasm is a complex neuroendocrine process that is unlikely to have evolved by chance.

Scientists asked Ms Tsarski to rank her climaxes on an orgasm-rating scale used in sex studies.

However, they did not provide the same levels of emotional intimacy and ecstasy as conventional climaxes.

Further analysis saw doctors measure her hormone levels, to see if her own orgasms actually had a measurable effect within her body.

The experiment was done three times, each a week apart.

Each time Ms Tsarski had a blood test taken 30 minutes pre-test, immediately after her orgasm, and 30 minutes post-test.

On the first occasion, Ms Tsarski brought her herself to climax without stimulation for five minutes.

She did the same on the second occasion but for 10 minutes instead.

In the last test, she sat and read a book for 10 minutes to act as a control.

Blood tests revealed her prolactin levels increased by 25 per cent immediately after her five minute orgasm.

Prolactin is a hormone that previous studies have suggested is produced by women post-orgasm.

No significant increase in prolactin was observed in the blood samples taken from the book-reading control test.

It was noted that Ms Tsarski’s prolactin levels were particularly high on the day of the 10 minute tests.

Lead author of the study, psychologist James Pfaus, explained this could be due to Ms Tsarski being in a particular phase of her menstrual cycle.

No other hormones measured in the blood samples saw similar significant increases as prolactin.

In a video taken straight after she climaxed and linked to in the journal, Ms Tsarki said: ‘What I just did I know every woman can do it.’

So called non-genitally stimulated orgasms (NGSO) have been reported in scientific literature before.

But debate has surrounded the truth of such experiences and such orgasms are measurable.

Normally, stimulation of the body’s erogenous zones combined with the mental aspect of arousal and sexual desire leads to orgasm in both men and women.

But women have reported orgasms in non-sexual situations such as during sporting activity/exercise or breastfeeding.

Ms Tsarski, who is listed as co-author of the study, said her journey to stimulation-free orgasm started to combat her vaginismus, an uncontrollable condition where the vagina suddenly and painfully tightens up when something is inserted inside it.

She started her yoga tantra training by: ‘learning body postures, breathing techniques, body locks aimed at learning how to awaken and sense energy, and then learning to guide it and move it upwards.’

‘In addition, I did pelvic floor exercises, breast massage practice, and practices to release shame and guilt.

‘I learned to relax and let go, accepted body image and brought increased mindfulness also to daily life in general ‘

Ms Tsarski said the sexual benefits came later as her training progressed, enabling her to overcome her vaginismus.

The study has been published in the journal Sexual Medicine.

Tue Apr 12 , 2022
Introducing YOUTH — the new dermocosmetic brand developed for the modern world. Sitting at the core of YOUTH skincare is a novel complex, the Phytodermato Advanced Formula®, that provides a protective shield against today’s top irritants: pollution, inflammation, and oxidation. These three irritants are believed to be the main cause […]