Children born in 2070 could live until the age of 150 thanks to advances in reverse-ageing technology, leading experts claim.

Not only could this double the current global average life expectancy, it may slash the time people spend in age-related ill-health.

What was once thought of as a distant pipe dream is now edging closer to reality after a pioneering study earlier this month managed to safely reverse the ageing process in elderly mice.

Scientists now predict the technology could be ready for humans in mere decades.

Dr Andrew Steele, a computational biologist and author of Ageless: The New Science of Getting Older Without Getting Old, told the i human trials would soon be on the horizon.

‘You’d be a fool to bet against it working in the next 50 years,’ he said.

Professor Jürg Bähler, a geneticist at University College London, predicted such tech could help boost lifespans by up to a century-and-half at the maximum.

‘Some people, including myself, would say there’s a natural ceiling for human life, about 150, and you can’t go beyond that,’ he said.

In the US life expectancy for children born in 2020 is significantly lower, 74.2 years for men and 79.9 for women.

The experts’ comments come just weeks after a team of scientists from the Salk Institute in San Diego reversed the ageing process in middle-aged and elderly mice using a cellular ‘rejuvenation’ technique.

Scientists have reversed the ageing process in middle-aged and elderly mice using a cellular ‘rejuvenation’ technique.

After injecting these molecules into mice of various ages, the animals’ kidneys and skin showed promising signs of rejuvenation, while their skin cells had a greater ability to proliferate and were less likely to form permanent scars.

Researchers said their ‘safe’ treatment could one day help humans wind back their biological clock, lowering risks of cardiovascular disease and cancer.

According to the findings, a treatment period of seven to 10 months may be required to stave off the unwanted side effects of ageing.

Some previous experiments in cellular rejuvenation have resulted in mice developing cancer or developing organ failure but this didn’t happen in the latest experiment.

And while previous experiments with  Yamanaka factors had countered the signs of ageing and increased the life span in mice bred with a premature ageing disease, the latest study was the first to test it on normal mice.

After injecting these molecules into mice of various ages, the animals’ organs and skins showed signs of rejuvenation.

Dr Steele said: ‘We’ve got the platform working in humans, and the concept working in mice.

‘I don’t think it’d be totally mad to see some reprogramming by rejuvenation in the next 10, 15, 20 years.’

He said this could take a form similar to gene therapy, which involves altering a person’s genes by infecting them with a harmless virus that has been genetically engineered to replace or de-activate a defective gene.

‘It’s in its infancy, but it’s existing technology. It feels like decades, rather than centuries, before we’re really good at it.’

Some sceptics of increasing longevity further argue that it could lead to overpopulation or that it would it limited to the ultra-wealthy causing greater social division.

The San Diego researchers said their treatment should be ‘safe’ in humans based on the lack of negative results in mice.

How do cells age – and how could the process be reversed?

As organisms age, every cell in their bodies carries a molecular clock that records the passage of time.

Cells isolated from older people or animals have different patterns of chemicals along their DNA – called epigenetic markers – compared to younger people.

Scientists have found that by adding a mixture of four reprogramming molecules to cell called Yamanaka transcription factors can reset these epigenetic marks to their original patterns.

This makes the cells effectively younger.

However experiments have shown this isn’t instant with studies on mice showing results only if rodents were treated with the Yamanaka for between seven to 10 months.

It’s hoped it will help humans wind back their biological clock, lowering risks of cardiovascular disease and cancer.

According to the findings, a treatment period of seven to 10 months may be required to stave off the unwanted side effects of ageing.

Gene therapy is already available on the NHS for a variety of genetic based conditions, such as metachromatic leukodystrophy a rare disorder which damages a child’s nervous system and organs, dramatically cutting their lifespan.

Professor Bähler said while other past increases in life expectancy have seen people live longer but often sicker, addressing the cellular process of aging would not have such a downside.

‘But what happens is people live longer and stay sick longer. They still get cancers at the same age, there are all these different morbidities.

‘But if you changed the underlying process, you’d help people stay healthy for longer.’

However, Dr Steele added that ageing is a complex process and that cellular rejuvenation is not the one answer to extended lifespans.

‘Think about proteins like collagen – it’s the most abundant protein in your body, and as you get older it changes function,’ he said.

‘It’s outside your cells so rejuvenating your cells doesn’t sound likely to change it.’

Mon Mar 28 , 2022
Yuna Oh has called Weill Cornell Medicine home for the past five years, discovering a passion for dermatology through her medical studies and finding inspiration from her professors. On March 18, the 28-year-old graduating student was thrilled to discover that her journey with the institution will extend another four years, […] 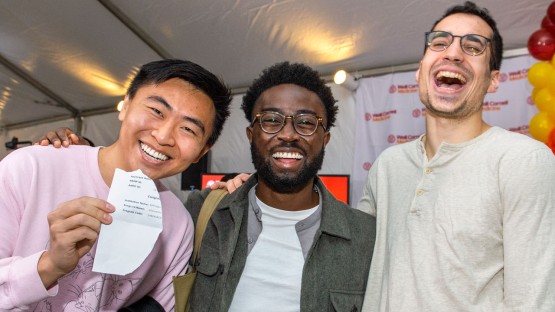