For a solid hour participants in the Slow Flow Yoga class, offered at the Southeastern Livingston Center in a cool, darkened room with soft instrumental music playing low, put their bodies through a progression of positions and poses that ran the gamut from lying on the floor to standing on one leg with arms raised high toward the ceiling.

The Slow Flow Yoga class was the first of a procession of programs that will be offered at the center during September. The classes offer potential participants numerous options for expanding their knowledge and skills in various disciplines.

Krystal Hardison, director of the Southeastern Livingston Center, expressed a special interest in the yoga class because yoga was the first program offered under the center’s Life Long Learning Programs, a string of sessions that have drawn many participants to classes on a wide range of subjects from crafts learning sessions to lectures about current affairs and information of general interest.

Yoga classes have been offered every month since January of 2020 and Sept. 6 session was the first of three that will be offered this month. The second was Sept. 13 and the third will be held on Tuesday, Sept. 27.

Members of the yoga class were led through their exercises, which came without a break, by Casey Harris who guided her devotees through their many positions with a smooth, even, well-modulated voice. Harris was the only person in the room who spoke … the women following her directions remained silent throughout the long hour.

Slow Flow Yoga, according to Harris, links breath and movement in a easy-flowing manner. The exercise is designed to improve strength, flexibility, balance and focus through the practice of yoga, Harris said. She explained that yoga, which has its origins in India, is an ages-old method of training the body and the mind in ways that lead to better health and physical ability.

She said yoga in India has some spiritual meaning but that in the United States it is primarily taught to improve one’s physical abilities.

Harris has been studying and practicing yoga for three years and her ability to keep the class flowing from one exercise to the other without any interruption, or without the use of cues or notes, is a talent that she has learned through her devotion to learning about the discipline of yoga.

She opened the session by instructing the participants to close their eyes while assuming a comfortable sitting position on their mats. She then told them to leave whatever happened during the day behind and to focus on their bodies, taking time to think about their bodies from the tips of their toes to the top of their heads.

Controlling one’s breathing is an essential part of yoga exercises and throughout the session Harris would gently remind her subjects on how to control their breathing. Early in the exercise the participants were told to fold their hands together pressed against their hearts as they practiced breathing techniques and gently voiced an, “oom.” As the class progressed the different poses became more complex and physically demanding. From the sitting position the class moved to a kneeling or “table top” pose and then rose to a standing position.

During the session, Harris managed to involve almost all parts of the body. At one point she instructed, “squeeze your face like you are eating something sour.”

She ended the class by asking her students to reflect on their intentions for attending the session. She asked, “did anything shift in your mind or in your physical body?” In the silence, each member of the class had to answer that question for themselves.

“I suffer from lupus and my whole body hurts for much of the time, said Margaret Westmoreland. “I can’t do strenuous, whole body exercising but I can do yoga and it helps me to relax and stay fit.”

Other programs that will be offered at the Southeastern Livingston Center this month include:

Is there any benefit to doing yoga in bed?

Sun Sep 18 , 2022
When most people envision doing yoga, they picture themselves rolling out one of the best yoga mats (opens in new tab) and performing poses on the floor. However, the practice of yoga is diverse and you can actually perform yoga in bed. Doing yoga in bed not only spares you […] 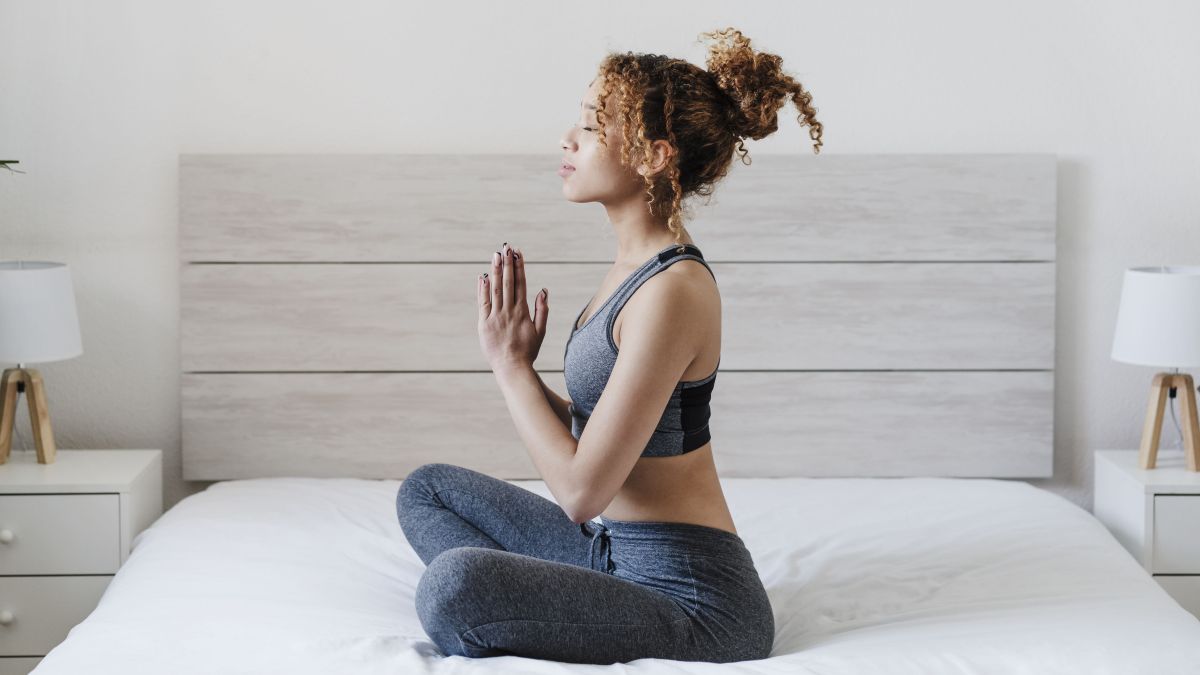