Viewers were not convinced as yogi and spiritual leader to the stars Sadhguru appeared on This Morning today.

The yogi, 65, whose real name is Jaggi Vasudev and who owns an Ashram in India, started his own non-profit spiritual foundation and has more than three million followers on Twitter, talked to Phillip Schofield and Josie Gibson, who was filling in for Holly Willoughby today.

Sadhguru, who counts Will Smith and American football player Tom Brady among his followers, talked about the search for inner peace on the show, claiming that a major event such as the Covid-19 pandemic doesn’t make people unhappy.

He claimed that ‘human suffering’ occurs because people ‘don’t know how to handle themselves’ spiritually and physically.

However, his teachings fells on deaf ears on Twitter, where This Morning viewers questioned his motives, calling him a charlatan and complaining he was on the show for too long.

Phil began the segment by pointing out Sadhguru’s Youtube channel counted 2.5 billion views last year alone, asking him whether he thinks his popularity is due to the fact everyone is looking for ‘inner peace’.

‘Whether pain or pleasure, joy or misery, agony or ecstasy, that can only happen within you,’ he said. 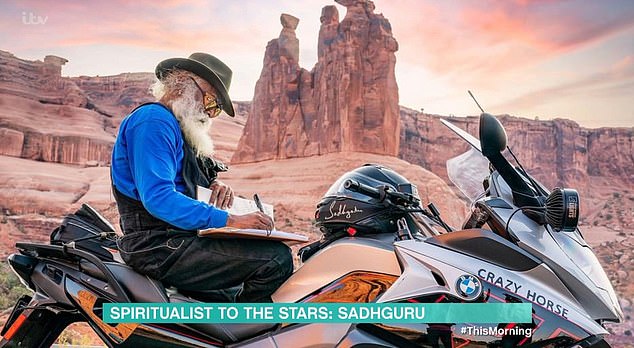 The yogi, whose real name is Jaggi Vasudev and who owns an Ashram in India, started his own non-profit spiritual foundation and has more than three million followers on Twitter. He’s currently doing a 35,000km journey in 100 days

Viewers called Sadhguru a charlatan, while others said his revelations about soil and predictions of wars scarred them

‘That is the human situation right now. Because we think we can squeeze some experience out of the world, but no. Human experience only happen from within.’

He said people being unhappy is not only due to the pandemic.

‘It’s always been there, human being are not suffering because of the pandemic,’ he added, although acknowledging the pandemic had taken lives.

When Phil asked ‘have we never known how to do that,’ Sadhguru interrupted him to say: ‘there is no “we” about this. You either know or you don’t.’

‘When people were living in the caves, they were complaining about the bugs and the mosquitoes and if you needed some water you needed to walk to the river. 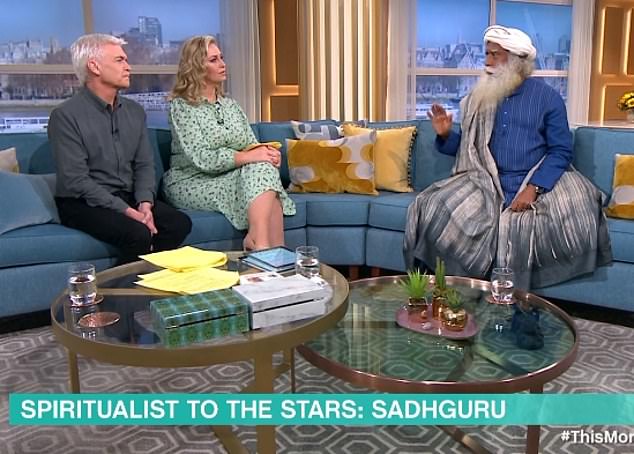 The spiritual leader told Phillip Schofield and Josie Gibson, left, that there will be civil wars induced by food shortages by 2035

‘Now they’re complaining because the tap water is not warm enough or complaining about the phone,’ he added.

He added that humans were used to acting ‘compulsively,’ which could cause them ‘great amounts of harm.’

‘All of this is a consequence of humans not being conscious. They are compulsive. Compulsiveness will not work at this level of competence and intelligence,’ he said.

The guru went on to talk about soil in the context of global farming.

‘There has been a lot of talk about the environment. Everybody’s been talking about climate change and global warming,’ he said.

‘But a lot of civic issues are being projected as ecological, and environmental issues.

‘Right now, a lot of plastic bags are floating around London city,’ he said. ‘This is not an ecological issue, this is a civic issue. This is a question of responsible behaviour from human beings. 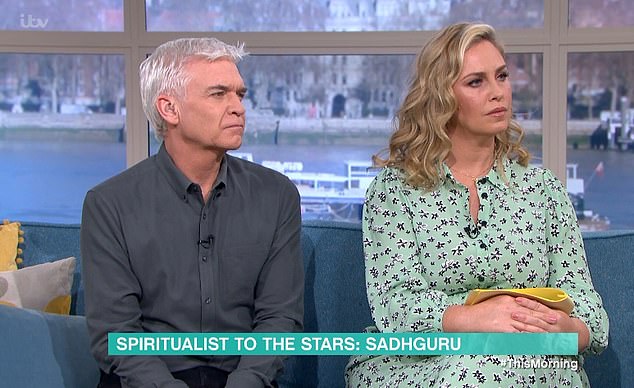 ‘London’s air is polluted, it is also a civic issue,’ he went on.

‘Urban issues are being projected as global issue. The world world doesn’t live in urban centres,’ he said.

‘One massive issue everybody is avoiding talking about for whatever their reasons, I don’t want to get into the politics of it, 71 per cent of the world’s land is under farming.

‘And that is in a super bad conditions right now, to the point where UN agencies are saying “You only have about 60 to 80 harvest left, which is about 60 to 65 years time,’ he went on.

The spiritual leader explained experts have said that by 2040, we’ll be producing 40 per cent less food than we are currently, leading to global shortages.

He went on to say people are a reflection of the soil their ingredients are grown in, and added that this is why the soil needs to be looked after better worldwide.

In order to raise awareness on the issue, Sadhguru is travelling 35,000km in 100 days from London to India on a motorcycle to spread the word.

However, he said it was ‘not a joy ride.’

‘People are not understanding the urgency of this. This is not one more issue,’ he said.

‘Several UN agencies have predicted that by 2035, there’ll be dozens of civil wars across the world because of food shortages.

However, viewers were not sold on the guru;s This Morning appearance, with some calling him a ‘charlatan.’

‘He must be absolutely loaded cos these so called ‘stars’ will pay a fortune to be told some absolute b******s. For a spiritualist he’s very angry,’ one said. 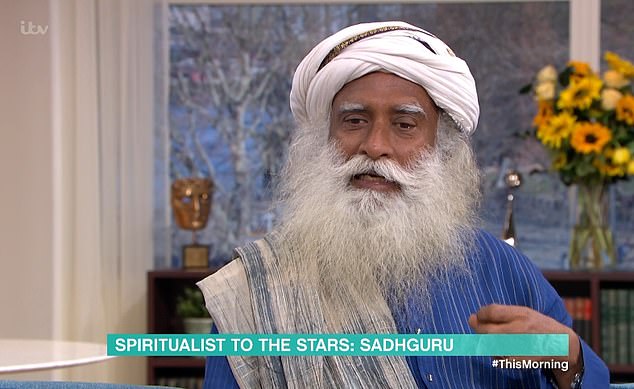 The spiritual leader explained experts have said that by 2040, we’d be producing 40 per cent less food than we are currently, leading to global shortages

‘I thought he was going to bring some peace and tranquility but all he’s done is get on my clack,’ another added.

‘Thanks for that Mr Yogi. Coming up next is a talking giraffe who is married to a silver toaster,’ a fellow critic chimed in, while another branded him a ‘charlatan’. .

Others said they were stressed by the guru’s speech.

‘This guy is actually stressing me out with his chat,’ admitted one.

‘The gurus words are utterly terrifying,’ another said.

Sadhguru has been teaching yoga in southern India since 1982 and in In 1992, he established the Isha Foundation near Coimbatore, which operates an ashram and yoga centre.

His followers include Will Smith and his family. In 2020, Willow Smith revealed Sadghuru helped her through an ‘existential crisis,’ saying she was filled with ‘gratitude’ for this moment.

16 Best Eye Creams For Wrinkles In 2022, According to Dermatologists

Sun Mar 20 , 2022
Christine Giordano Some of the best eye creams will work wonders for even the darkest of under-eye circles, but if your current eye cream doesn’t reduce fine lines and/or wrinkles, maybe it’s time to replace it with one that does. It’s easy to forget to apply eye cream while performing […]