The Kearney School District has been keeping a supply of Narcan on hand, the opioid overdose medication. Just in case.

Last fall, when that stock was set to expire, district nurse Karen Hughes found a national program that gives it to high schools for free. So she signed up.

Just days after receiving the fresh Narcan, school staff members had to use it. On a student.

Citing privacy issues, school officials won’t give many details about what Hughes calls “the incident.”

But what unfolded at a Northland school was a “best-case scenario,” assistant superintendent Jeff Morrison told The Star. “The student is still alive.”

Hughes had trained staff to recognize the signs of an overdose. Pale or clammy skin. Shallow breathing. Unconsciousness or difficulty speaking. Unresponsive when shaken. Possibly blue lips or fingertips. Another big sign she tells them about: Pupils as tiny as pinpoints.

Recognizing what was happening, staff members squeezed two full doses of Narcan into the student’s nostrils; more than one dose is often needed when strong opioids, such as fentanyl, have been taken. They saved that young person from becoming a statistic in the country’s growing overdose crisis.

Incidents like that are pushing more schools toward stocking naloxone — Narcan is the brand name — and training staff how to use it. Law enforcement officials are warning families and communities about an explosion of overdoses across the country, particularly noticeable among ages 15 to 24 in the Kansas City area.

Given quickly, naloxone can counter the effects of an opioid overdose within minutes.

Many — but not all — school districts in the Kansas City area keep Narcan on hand, according to an informal sampling by The Star.

It’s happening in the North Kansas City school district, which in March lost student Ethan Everley to an accidental fentanyl overdose at home. “Obtaining Narcan for our schools is a top priority,” spokeswoman Susan Hiland said in a statement.

The district is working with a local pediatrician, who will serve as medical director, as it places the medication in each of the district’s 32 schools, Hiland said.

Kansas City Public Schools have stocked naloxone in the past when it was available to schools through a state program. Now that the district can get it free from the maker of Narcan, it plans to stock it for the 2022-23 school year, according to spokeswoman Elle Moxley.

The Lee’s Summit district has stocked fresh Narcan since the 2019-2020 school year. Each health room is equipped with one dose, according to a district spokeswoman.

But Kansas City, Kansas Public Schools do not stock it. Neither does the Blue Valley district in Johnson County.

“We are fortunate to be located in a community where emergency services are just a few minutes away should the need arise,” said Blue Valley spokeswoman Kaci Brutto.

Also in Johnson County, De Soto schools don’t stock Narcan, either. Last August, the district lost a 16-year-old student, Cooper Davis, when he took half a pill unknowingly laced with fentanyl at a friend’s home.

But De Soto spokesman Alvie Cater said the district “would certainly want to be part of” future discussions about making Narcan available to Johnson County districts.

‘Foaming at the mouth and unresponsive’

A few months after the incident in Kearney, halfway across the country in Hartford, Connecticut, another student was not so fortunate.

In January, the 13-year-old seventh-grader died after an apparent fentanyl overdose at his school, which did not have naloxone on hand. After he died, city officials called for placing Narcan in all Hartford schools.

In December, a Colorado teen died after swallowing a pill laced with fentanyl in a school bathroom. She was taken to the hospital after a teacher saw her “foaming at the mouth and unresponsive.”

The two largest school districts in Colorado, including Denver Public Schools, now plan to stock naloxone. More Colorado teens died from overdoses last year than in any year since 2000, according to The Denver Post.

Since 2015, the National Association of School Nurses has recommended that schools stock naloxone as part of their school’s emergency preparedness and response plans.

School nurses are, in effect, first responders. Giving them access to naloxone “will improve opioid overdose response, response preparation, and harm reduction and avoid horrific outcomes such as death,” the nurse organization says.

Given the nationwide fentanyl emergency, “anybody who has a family member or friend or is around people who use drugs should have access to Narcan or naloxone,” said Dr. Doug Burgess, addiction medicine specialist at University Health in Kansas City.

“And, anybody who works with a group that it is maybe high-risk for experiencing an overdose, and I really think that more and more, especially with younger people experiencing overdoses, (we’re) looking at places like school systems.”

Over the last six months, Burgess has seen much younger clients, including high-schoolers and even younger, addicted to opioids.

Two years ago, the nonprofit advocacy group Legislative Analysis and Public Policy Association reported that seven states at that time required some schools to have naloxone policies. Schools in Maryland are required to carry a supply.

But there appears to be little data on how many schools have it or are training staff about overdoses.

On Thursday, the school board in Alexandria, Virginia, voted to place naloxone in schools immediately, following the deaths of two teens in the county who apparently took drugs laced with fentanyl.

The manufacturer of Narcan provides every high school in the country access to two cartons of nasal spray, four doses, as well as free supplies to colleges, YMCAs and public libraries, according to Missouri’s health department.

“Think of it like a fire extinguisher,” said Burgess. “You’re not expecting to have a fire, but if there is a fire you’re going to have that available.”

‘Always best to give it’

In 2019, Missouri’s health department identified Clay County as an area of concern for opioid use and overdoses. After that, Kearney schools placed Narcan at the high school, junior high and middle school, said Morrison.

School nurses are the recommended users, but administrators are trained, too, as well as teachers who want to know how to use it, said district nurse Hughes.

They learn what an opioid overdose looks like, and that “it’s always best to give it” if an overdose is suspected, she said.

“There’s no harmful side effects of just giving it if they truly weren’t overdosing at the moment,” Hughes said. “And so we really stress that. Go ahead and give it and we’ll get EMS on their way to us to help with the remainder of the treatment.”

Over the years, the district has stayed plugged into what’s going on outside school walls through Northland task force discussions involving law enforcement agencies, school administrators, school nurses and others.

“So you’re kind of aware of what’s coming,” said Morrison, assistant superintendent of human resources and student services who has worked nearly three decades in the district.

“We’ve over the years talked about things … ranging from methamphetamine to heroin, to bath salts … unfortunately what is that drug out on the street that we need to be concerned of and watching for in there and for our community, for the safety of our kids.”

You don’t need medical training to administer naloxone, though school districts that stock it typically train staff members how to use it.

In Kansas, any family member, friend, caregiver, or other person “in a position to assist a person” experiencing an opioid overdose can administer naloxone, according to an analysis of state laws by the Legislative Analysis and Public Policy Association.

That includes first responders, law enforcement officers and school nurses who are authorized to possess and store it, too.

Opioids affect the part of the brain that tells the lungs to breathe, said Burgess. The naloxone rushes to that part of the brain and blocks that potentially fatal effect. One container of Narcan holds a single dose that gets sprayed into one nostril.

In Clay County, Sheriff Will Akin has made fighting the scourge of fentanyl a priority for his drug task force, leading community meetings to teach parents and the public what to watch for.

Kearney schools invited the sheriff’s office to talk to students, parents and the community.

Hughes is alarmed by national surveys that show the breadth of drug use among young people right now. She and Morrison think schools should keep Narcan at the ready.

“I think anything that you can do to support your students, especially from a health standpoint, you definitely want to do,” said Morrison.

“The challenge for us, we have seven hours in the school day that we can try to help the child. It’s what happens in the next 17 hours that’s out of our control.”

Lisa Gutierrez writes about medical and health-related issues for The Kansas City Star. She is a Kansas native and veteran of five newsrooms. She was a caregiver for her husband, who had dementia, until he died in July 2019.

Tue May 17 , 2022
Target is now a one-stop shop for almost everything you need, including groceries. Whether you stock your entire kitchen from Target or just pick up a few snacks while shopping, the superstore has many great options. Snacks sometimes get a bad rep, but they can be an opportunity to improve […] 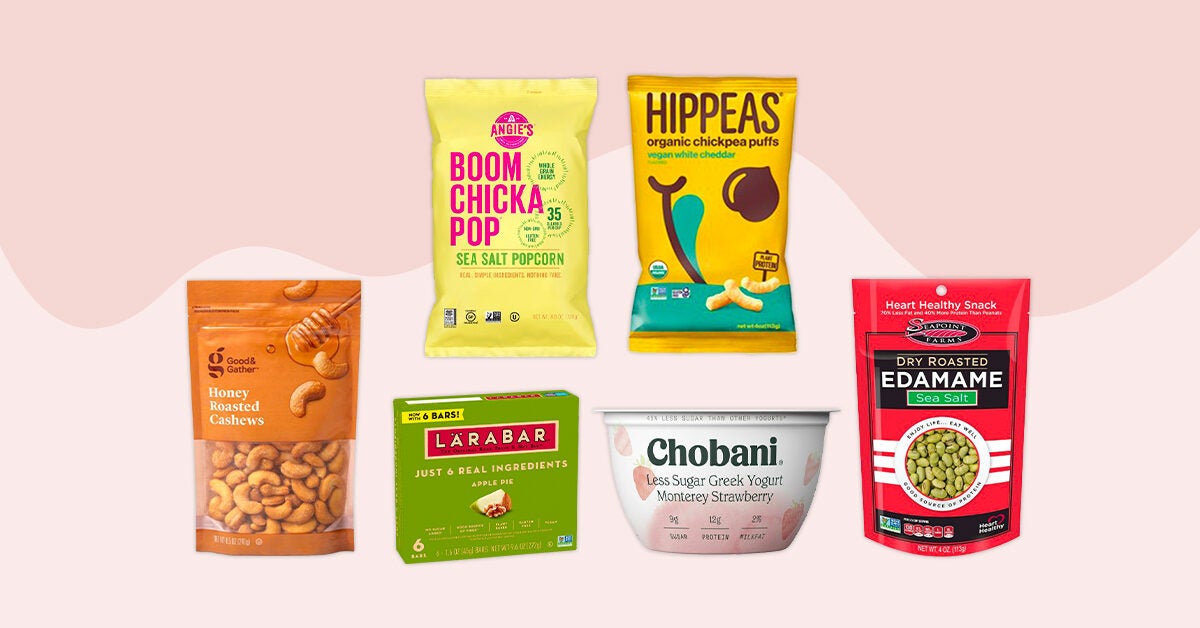 Bodies come in different shapes and sizes, influenced by a person’s frame and composition. This is part of what makes every human unique. Some bodies are curvier, some have broad shoulders, and some have more musculature. People usually have a defined body type after puberty, but this can change based […]